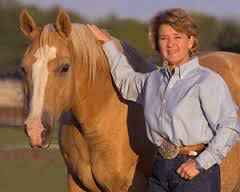 Anyone who has had to raise an orphaned foal knows the difficulties that have to be overcome. And so it was with Jackie Kyle Krshka in the spring of 1978when she found a four week old Palomino filly wandering aimlessly in the pasture because he mother had died.

Jackie brought the filly in and bottle fed her until she was old enough to start eating grain. She named her Sweet And Innocent. Because Jackie says that’s exactly how she acted.

The bond that developed between the two is heartwarming and under the circumstances probably inevitable. Jackie says that no horse has ever touched her heart like Sweet and Innocent.  That she could read Jackie’s mind and that she instinctively knew when it was show time.  Jackie and Sweet And Innocent became known as “the blond duo/”

Sweet And Innocent qualified for the 1982 AQHA World Championship Horse Show in six events, a very rare accomplishment. She injured her leg in the Junior Working Cowhorse event and they kept her on an ice boot until she was called for her next event Junior Reining.  Although the pain she was in was apparent to Jackie, Sweet And Innocent went through the entire pattern without showing it.

Many articles have been written in various publications about Sweet And Innocent and that magic night in 1982 and many people have recalled that performance to Jackie through the years that followed.

She became a broodmare in 1983 and produced ten offspring. Six of those have won $62889 in AQHA and NRHA events and have compiled 239.5 AQHA points.

Sweet and Innocent died four years ago from colic complications and is buried at Krshka Quarter Horses.

Sweet And Innocent was inducted into the Oklahoma Quarter Horse Hall of Fame in 2011.