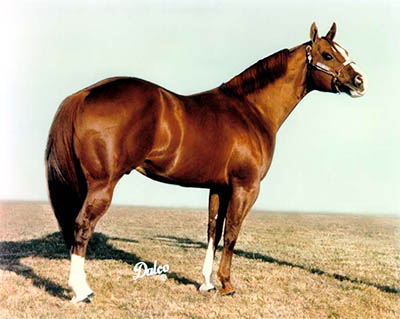 What’s in a name?  If you are The Invester, a lot. Foaled in 1969 and bred by Eldon England of Oklahoma City, Oklahoma, The Invester was originally named Hank Lou Bars, tracing back to his sire, Zippo Pat Bars, and dam, Hank’s Peppy Lou.  When owner Jerry Wells bought him at the Oklahoma State Fair, he thought the sorrel colt would make a good investment, and so he changed his name to The Invester. Jack Benson bought the horse in 1973, and he and his trainer, Brad McCamy, worked to promote the stallion.  The Invester’s natural movement – athletic and powerful, yet graceful – enabled him to become a foundation sire of modern pleasure horses.  In 1980, six of the sire’s foals were in the All American Quarter Horse Congress pleasure futurity finals.  Four of the six took the top four spots. He sired four AQHA world champions – El Cicatriz, 1974 youth yearling gelding; We Are Magic, 1980 open weanling mare; AQHA Champion Bonafide, 1985 youth western pleasure; and Impulsions, 1989 2-year-old western pleasure champion. Benson was killed in an automobile accident in 1989, which left the fate of The Invester uncertain.  Carol and Dan McWhirter of Doniphan, Nebraska, were in need of a sire for their breeding program, so they formed a partnership with a friend, Wayne Atchley, and moved The Invester to Nebraska. The sorrel continued on his duties as a great sire.  Of his 1,166 foals, 426 earned 22,745 points.  There were 16 AQHA Champions, one Youth Supreme Champion and numerous Register of Merit earners.  His foals have earned more than $190,000 in AQHA’s Incentive Fund, more than $18,000 in National Cutting Horse Association competition and more than $300,000 in National Snaffle Bit Association events. At 33, The Invester was euthanized because of complication due to old age.