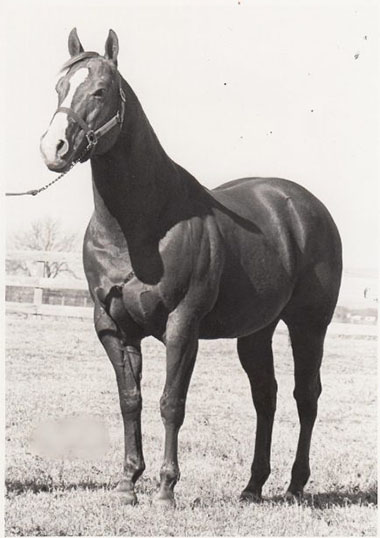 Bred by Frank Vessels Sr., The Ole Man was by Three Bars (TB), arguably the most all-around influential Thoroughbred sire in Quarter Horse history. The sorrel colt was out of the Chicaro Bill mare, Chicado V, and was foaled shortly after the death of Vessels Sr.  The Ole Man, lived up to his name. Foaled in 1963, and breeding mares well up to the day he died at age 32.  The stallion was named for his AQHA Hall of Fame breeder, Frank Vessels Sr, “the Ole Man” who founded Los Alamitos Race Course, and both his sire and his dam are AQHA Hall of Famers.

With a speed index of 100, The Ole Man garnered eight wins, four seconds and seven thirds, and earned $20,657 out of 33 starts. From the time he earned his AAA rating, he brought back 20 checks from 21 starts. He won the Stallion Stakes and the Lightning Bar Stakes, possessing the stamina, heart and soundness to run 24 races his 3- year-old year.

In September 1966, The Ole Man was purchased for $100,000 by Roy Browning, who at the time, lived in Fort Worth, Texas, and later stood the stallion on his Roy Browning Ranch at Shawnee, OK. A true all-around horse, The Ole Man sired 1,878 named foals in 28 crops, to be one of the very few sires of Superior champions in racing, performance and halter.

Few horses have ever had as much influence as a sire – or for that matter, a more appropriate name. The last known surviving son of Three Bars, The Ole Man died in February 1995, after breeding 100 mares in both of the previous two years. The stallion was a major factor in owner Browning being the AQHA Champion Breeder in 1987 and 1991.

The Ole Man was inducted into the American Quarter Horse Hall of Fame in 2018.