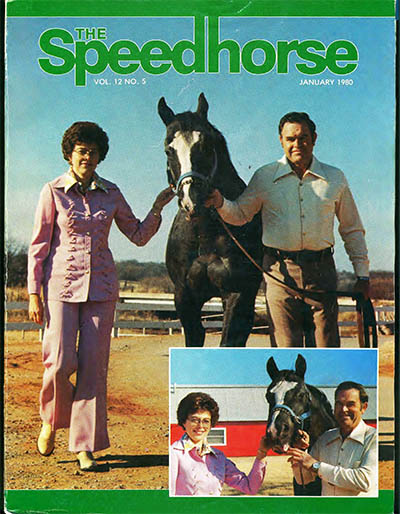 Although he was an AAT runner and earned more than $40,000 during his racing career, Top Moon did not make a name for himself until he was retired for breeding.

Bred by James Carter of Clovis, California, Top Moon was foaled in 1960, the result of the only mating between AQHA Hall of Fame member Moon Deck and Rica Bar.  The black stallion was owned by Clary Spencer of Oklahoma and a combination of partners for the majority of his life until he was sold to Larry Blackmon of Mineral Wells, Texas in December 1982.

Top Moon is known as a prolific sire within the race industry,  but he was certainly able to hold his own on the track as well.  In his three-year career  on the racetrack, he ran a speed index of 100 or greater eight times,  won or placed in nine stakes races and earned $40,637.

Top Moon’s first World Champion was sired in his second of 20 crops.  Top Bug, out of Lady Lasan, earned the title of World Champion 2-Year-Old Filly in 1968 and set a new track record in Laredo, Texas that same year.

Top Moon’s foals did not just excel on the track; they also have made their presence known in the show ring.  Sixty-two of his son’s and daughters have performed in the show ring, earning 126 Halter points and 1,314 performance points, three Superiors and 19 Registers of Merit.

In 1984, Top Moon died from complications that began as an ear infection.  He was inducted into the American Quarter Horse Hall of Fame in 1999.