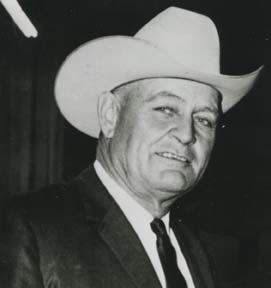 “We raise the horses we run and run the horses we raise,” said Walter Merrick, the Sayre, Oklahoma, horseman who started raising Quarter Horses in the 1930s.  His 14 Ranch produced some of the top Quarter running horses of all time. Merrick moved from Colorado to Oklahoma in 1928 and signed on with the Figure Two Ranch as a bronc buster.  Along with the move, the cowboy vowed to someday have “good horses.” The owner of the Figure Two gave his Depression-era workers cattle from time to time to make up for low wages.  When Merrick owned a herd of 14, he branded the cattle with the number and eventually formed the 14 Ranch. In 1936, Merrick purchased Midnight Jr, by Midnight, by Peter McCue, and the little stallion went on to lay the foundation for Merrick’s breeding program.  A few years later, Merrick added Thoroughbred mare Lena Valenti to his broodmare band.  The mare ran six furlongs like a quarter-type horse, and was considered a foundation mare for Merrick. In 1951, Merrick persuaded Sid Vail, owner of the Thoroughbred stallion Three Bars, to lease the stallion.  Merrick bred the Thoroughbred to his Quarter Horse mares and to Lena Valenti.  The cross between Three Bars and Lena Valenti produced Lena’s Bar (TB), who raced successfully against Quarter Horses. Lena’s Bar was bred to Jet Deck, and the cross produced AAAT stakes winner and AQHA Champion Jet Smooth.  Merrick bred the mare back to Jet Deck, and got Easy Jet, winner of the 1969 All American Futurity.  The sorrel colt propelled Merrick’s reputation to the top of the breeding industry. Merrick became an AQHA Director in 1952, and served on the show and contest and racing committees.  In 1981, the Association named Merrick an Honorary Vice President. Merrick was inducted into the American Quarter Horse Hall of Fame in 1993, the Oklahoma Quarter Horse Hall of Fame in 2005 and died in February 200