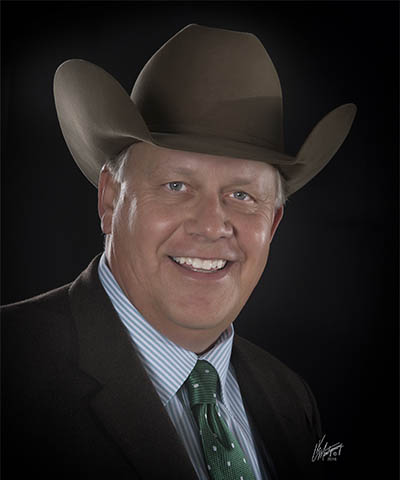 Wayne Halvorson was born November 3, 1958, to Clifford and Leona Halvorson of White Earth, ND.  He grew up on a ranch and received his first horse for Christmas when he was only three years old.

When he was eight years old he place an advertisement in a local newspaper asking for horses to train.  Wayne started his 4-H and FFA projects with horses and cattle.  He was very busy as a teenager with his training business which he exhibited in horse shows for 4-H, open, Appaloosa Horse Club and American Quarter Horse Association horse shows, and youth, high school, college and professional rodeos.  In addition to his training business, Wayne worked cattle with his father.  They used a team of horses to feed cattle in the winter.

When he was 18 years old, Wayne began his own horse training operation while representing University of North Dakota in college rodeo events.  Wayne graduated with honors when he earned his degree in Business Administration.

Then Wayne was hired to work in Texas at the Tommy Manion Ranch.  He trained and showed at the most elite level of competition.  He worked for Swank Ranch in Agora, CA.  Then he moved to Willison, ND and ran an operation there for two years.  Next Wayne worked at the Diamond S Ranch in Houston TX.  He moved to Edmond OK ran his own training business.  Then he went into a five year partnership with Cal and Rosemarie Loree who owned Loree Quarter Horses in Guthrie OK.  For the past 20 years, Halvorson Ranch has been run by Wayne, Rebecca, Lauren, Austin and Calyn in Guthrie, OK, specializing in training, showing and a breeding operation.  Halvorson has managed the breeding of an impressive list of outstanding stallions throughout the years.

Wayne is a past chairperson of the AQHA Professional Horseman Committee, current member of the AQHA Judges Committee, was elevated to the position of AQHA Director At Large, and served twenty-five years as an Oklahoma Quarter Horse Association Director and two years as OQHA President. Halvorson was the architect of the OQHA Redbud Spectacular Quarter Horse Show and proposed the Regional Horse Show concept.  Halvorson has always been a strong proponent for the welfare of the horse and dedicated to the American Quarter Horse Association.

Wayne was a founding member of the National Snaffle Bit Association and the World Conformation Horse Association.  He also served as WCHA President.

Wayne and family have earned numerous AQHA and PHBA World Champions.  He and his wife Rebecca live in Guthrie OK.