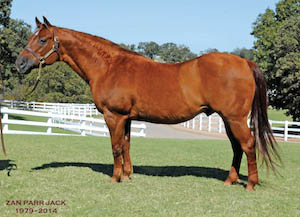 Early in 1984, Ed Gaylord purchased Zan Parr Jack and brought him home to the Lazy E Ranch located in Guthrie OK and to AQHA Professional Horsemen John Miller and J. D. Yates for training and competition. Miller and Yates have described Jack as phenomenally talented, gentle and athletic.

Yates and “Jack” claimed the AQHA senior heeling world championship in 1984 and repeated the feat in 1985. The stallion also earned top ten placings in senior working cowhorse and tie down roping.

In a show career that lasted through 1989 and included multiple high-point awards, AQHA World Championship Show top-10 finishes, AQHA Superior awards in both heading and heeling, and open and amateur Registers of Merit, Zan Parr Jack earned at total of 628 AQHA performance points.

As accomplished as he was in the show pen, Zan Parr Jack excelled in the breeding shed as well, consistently siring horses known for their athletic ability, willingness and try.

His offspring excelled in open, amateur and youth divisions. More than a few of them retired from their show careers and went on to produce champions themselves.

Another superior Zan Parr Jack daughter, Jack E Eleven, was a 1991 mare who earned four AQHA world championships in open and amateur heading and heeling, then retired to a broodmare career, producing AQHA Superhorse With All Probability.

Zan Parr Jack’s influence continues on through generations of top Quarter Horses the world over. His record show he sired 347 foals with 115 performers that earned 19,577.5 AQHA points in all divisions combined.

His offspring have earned:

When the Gaylord family sold the Lazy E Ranch, there was mutual agreement to leave their longtime resident in place for the rest of his life.

Butch Wise, the Lazy E manager, felt that the talented stallion’s accomplishments and the Gaylord’s desire to share his genetics contributed to the continued success of the Lazy E Ranch.

Zan Parr was a wonderful stallion that excelled in the show ring and was able to pass his athletic traits on to his offspring.  That is a unique combination.

The 35 year old stallion who earned multiple AQHA world championships and was a prolific sire was euthanized December 2, 2014 due to infirmities of old age.