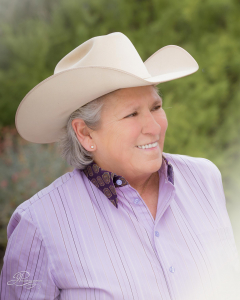 One thing for sure, Lavonna “Shorty” Koger is one of those people that you aren’t likely to forget and almost everyone that’s ever got to know her has a “Shorty” story to share.  A perfect recipient for the 2016 Bud Breeding Oklahoma Spirit Award, Shorty Koger is a big hearted supporter of all things Quarter Horse and is always willing to help a good cause

Not really from a “cowboy family” but always destined to be a cowgirl, she was the youngest of 4 children and that earned her the nickname “Shorty”.  For at least 20 years Shorty has helped her customers show their own style when it comes to the hats they wear.  Cowboy Hats are a timeless symbol of those who eat, breath, and sleep immersed in the world of Quarter Horses.

There was never a time in her life once she was old enough to go out of the house by herself that she wasn’t engaged in some kind of cowgirl activity.   From her childhood days, through her rodeo years as a fierce and competitive contestant running barrels, un-decorating steers, and even riding bulls in the all-girl rodeos, you were likely to see her at any horse event in this part of the country!  She even had a stint working with a racehorse trainer, ran a western store for several years, became an out of the truck merchant selling blue jeans and beer to pay her entry fees,  and then ended up in the hat business.

As one of today’s leading industry hatters, Shorty started really small buying equipment in 1990 from a guy that was getting out of the hat cleaning business in Oklahoma City after her brother had suggested she look into the trade because of her skill with restoring his beat up old hats.  To work on hats you have to have steam.  The steamer that came with her purchase of the hat business was a beer keg on four legs with a pipe up and a golf ball for a pop off valve for a gas –fired burner that leaked as much gas as it burned.   Shorty at the time was a smoker.  When the Fire Marshall showed up to inspect her operations, he quickly shut her down to keep from blowing up her and all the other businesses in the block.

As Shorty’s good fortune improved, she moved her shop to the Stockyards in Oklahoma City, and she also began sponsoring hats for cowboy competitions.  In the early 1990’s, she sponsored all the IPRA champion cowboys, giving a hat to the high point winner in each event every month, then new hats for all the IPRA Champions for another 8 or 9 years.  As time went on, and as times got better, she could be counted on to help out a good cause at a horse show, a cutting, a reining event, or at a rodeo.  She loved all the people and all manner of Quarter Horse events and she had great compassion for the people in the industry.

Her first AQHA World Show to sell Shorty’s hats was about 1994 or 1995, and without question a Shorty Hat has become a favorite choice for horsemen from coast to coast, and many foreign countries.

In about 2003 she learned of a fundraiser at the AQHA World Show for a very popular lady in the show horse world that was fighting cancer so Shorty donated a hat which was auctioned to raise money.  Very shortly thereafter, Shorty’s own sister Shirley Bowman was diagnosed with Cancer.  Shirley had no insurance and ended up waiting too long for medical attention so that she was old enough for Medicare to help with her treatment costs.   The problems for her sister drove Shorty’s determination to raise money to help people with no insurance receive the treatment they needed.  She started with a jar on the counter at the store, and with the help of friends and fellow horse people they held special events and all manner of other fundraising efforts to raise money for her goal.  One of her biggest challenges during that time was her own battle with cancer, but by God’s grace she was a survivor.  Through all her determined efforts and the help of many close friends, the Rein in Cancer foundation was created in memory of her sister.  Over $1,000,000 later, horse people have raised money which has allowed the Rein in Cancer Foundation to endow the Shirley Bowman Nutrition Center in conjunction with the Stephenson Cancer Center at OU Health Sciences Center in Oklahoma City.  The foundation and horse people are still raising money to help other horse people deal with the costs of fighting cancer that are not covered by traditional insurances.

For sure, Shorty Koger is a perfect example of the Bud Breeding Oklahoma Spirit!!