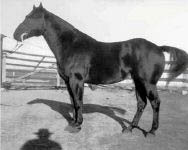 Cowboys in the 1930’s  and -40’s  needed good horses to work and compete on, and Bert horses were among the best.

Born in 1934, the brown stallion was bred by Bert Benear of Tulsa, Oklahoma.  Sired by Tommy Clegg, Bert was out of Lady Coolidge by Beetch Yellow Jacket.  Barely broke to ride as a three year old, Bert nearly cut off his right front foot with wire.  Afraid to ride him, Bert’s owners decided to use him for breeding purposes.

If Bert had one downfall, it was that he didn’t  have a very pretty head, and he passed that less- than-fancy mug onto his offspring.  He also passed on a grand amount of muscle and tremendous back ends; just what Eastern Oklahoma cowboys wanted.

Not many of Bert’s sons were kept as stallions because people wanted the colts for using purposes.  Also, it was said if a horseman had a Bert mare, he was in the horse business.  Bert sired four AQHA Champions:  Bert Lady, Janie Bert Watts, Sutherland Dwight and Thomas Bert, and his daughters produced 24 AQHA Champions.

Another well known Bert horse was Jeanne  Patsy, the 1955 AQHA high-point tie-down-roping horse.  One of the most famous Bert granddaughters was Baby Doll Combs, known as the legendary Baby Doll in the rodeo arena.  In the 1950’s,  nearly every steer wrestler who rode Baby Doll Combs placed in the money, and more than one cowboy cried when Baby Doll died.

Bert died in May 1956 at the age of 22.  He was inducted into the AQHA Hall of Fame in 2007, and we are proud tonight to induct Bert into the Oklahoma Quarter Horse Hall of Fame to take his place alongside of his granddaughter, Baby Doll Combs, who was inducted in 2010.