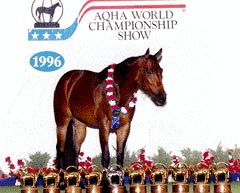 CC Surprise was a 1985 bay mare by Snow Surprise out of Bye Bye Blackbird bred by Crawford Cameron Jr. of Marietta, OK .

In 1989 Alice Holmes got a call from a fellow trainer who said they had a unique mare they wanted to sell. Alice went to their farm, tried the mare out and returned the next day with a jump in tow.

She learned that the mare was a former race horse and a former barrel horse. Neither of which CC Surprise (affectionately known as Molly) was successful. She had a speed index of 66 with two starts, and at that time, the present owner, famous barrel racer Mary Burger, said she could not turn left .

Alice ended up making the deal and bought the mare with the unusual skunk tail and took her home. The team of Brian & Alice of Goldsby started CC Surprise’s new career.

By 1990, the mare was jumping and had learned to pull a cart, and was showing promise as an under saddle horse. She earned her ROM, placed at the Congress in the driving and was third at the 1990 World Show in Pleasure Driving, and fourth in the Hunter Under Saddle. She also finished in the Top Ten nationally in Pleasure Driving, Hunter Under Saddle, and Hunter Hack.

In 1991, now that Molly was a seasoned driving horse, Alice got a wild idea to let her Dad, Chuck Whistler, try and qualify for the World Show in Pleasure Driving. Being a retired engineer, Chuck had the time to attend enough shows to qualify.

As a youngster, Chuck had driven teams of horses on his grandpa’s farm- but never had been in a show pen. However, at age 67 he started! That same year, Molly acquired enough points to finish 3 Superiors in the events of Hunter Under Saddle, Hunter Hack & Pleasure Driving, earning her an AQHA Performance Championship, as well as the High Point Pleasure Driving horse for 1991.

The 1991 world show began her unprecedented, record running World Championship Title Wins by winning the amateur Pleasure Driving with Chuck Whistler, the only man in the pen, and at the age of 68.

Molly and Brian Holmes were also crowned the World Champions in the Open Pleasure Driving class. Molly was then purchased by Joyce Saul of Des Ark, Ark.

While the Saul family was no stranger to showing horses, Joyce had always acted in the role of sideline supporter. Now it was her turn in the ring. Continuing with the expertise of Alice & Brian, the new team of Molly & Joyce started in 1992 at the Florida Gold Coast and Joyce is still a driving exhibitor today.

CC Surprise also was the mother and grandmother to many winners that have followed in her footsteps. Her first offspring, Surprise Me Moxie, earned 131 points in 4 events as well as winning the Pleasure Driving at the Congress in 1999. All of her foals have been Pleasure Driving horses, as well as many of her grandkids.

Most recently Joyce won a World Championship as well as the Year- End High Point with a granddaughter of CC Surprise, Huntin the Blues, a beautiful gray mare by Sky Blue Boy. The unequalled heart and abilities have formed an unimpeachable legacy that continues in her offspring.

CC Surprise was a groundbreaker and she set the bar for all the pleasure driving horses to follow. Molly was truly one of the greatest.