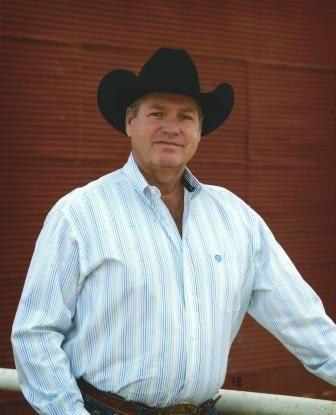 Jeff Terpstra has dedicated his life to the horse industry and contributed tremendous amounts of time as a volunteer.  He is found pushing calves at the AQHYA Youth World Championship Horse Show, delivering roping chutes and panels to Oklahoma Quarter Horse Association horse shows or showing an Oklahoma School for the Blind student how to rope.

He was born and raised in central Iowa.  His dad was a professional horse trainer, so Jeff was involved and around the horse industry at a very early age. He grew up riding all round horses.  The family showed them at halter and then saddled them to do the performance classes.

His dad also trained rope horses so Jeff has been roping ever since he could swing one. He showed horses all through his youth.  Jeff’s father, mother and sister also exhibited horses.  They were a horse show family!  Jeff lost his dad when he was 14 in a horse related accident but he left the family with the love of horses that lasts to this day.

At 19, Jeff moved to Oklahoma with Lynda, his wife for 31 years, and started a life in Oklahoma. He worked as an ironworker for five years when a crane operator hit the structure he was on and knocking him off breaking both heels and his back in 3 places. Two years later, in 1988, he started training horses for a living.

In 1989 their daughter Lacey was born and which launched another horse show family program. 1991 the Terpstra’s bought a place near Guthrie OK where they still live today.  Jeff began training riding horses for a living.  He rode anything from mules to the broncs that no one else wanted to ride. But there were some real nice ones too. He trained horses that earned points in halter, western pleasure, western riding, reining, cow horse, trail, speed events, roping and even the English.

When Lacey was little she used to say daddy ropes cows and mommy works and Lacey plays, well not much has changed.  Jeff still rope cows and Lynda still works and Lacey works now but she still comes and plays with her dad every once in a while.