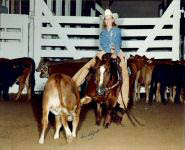 Foaled in May 1971, Royal Santana was born famous. He was the son of “Peppy San who was an AQHA Champion, a two time National Cutting Horse Association Champion and a member of both the AQHA and NCHA Halls of Fame. He was out of Royal Smart by Royal King.

But an AQ\A World Championship title still eluded Santana, so in 1991 Frank decided to give it one more try.

After watching Robin score a 218 on Barb Olena, Frank knew he had to score big to win. Frank cut cows that would challenge Santana, and his last one was a charger Brahma-cross that caused Santana to dig deep. When the dust settled, their 220.5 score lasted through 13 more runs to the AQHA Amateur World Championship/

In a world where youth is sought, admired and acclaimed, Royal Santana defied the odds when he won his first AQHA World Championship title at age 20.

Royal Santana died in 1995 and was buried next to the arena named in his honor at Merrill’s Windward Stud ranch.