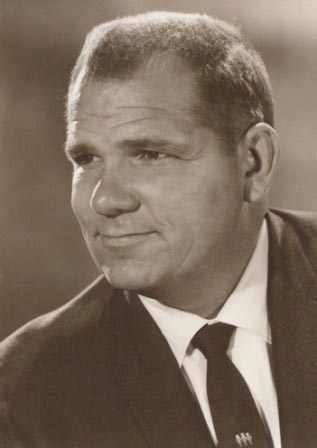 Chet Robertson was born September 3, 1920 in Choctaw, OK. His family soon moved to Oklahoma City where he excelled in academics as well as athletics. Chet was an outstanding football and baseball player in high school earning the All City football team and because of academics graduated at mid-term from Classen high school. He received a baseball scholarship to Pasadena Jr. College where he played one season. While at Pasadena he had the privilege of playing baseball with the great Jackie Robinson. Chet always said he was one of the nicest men he had ever met

When he became age eligible he left Pasadena to take a football scholarship. He was offered several football scholarships with the best offers coming from the University of Oklahoma and the University of Tennessee. Chet had always wanted to play for OU but Tennessee came through with the best deal, a full scholarship. UT was a powerhouse at the time so Robertson was off to play two years for Major Neyland and the Volunteers. As #17 Chet played half back and was part of the Sugar Bowl and the Rose Bowl teams before being drafted by the Army Air Force during World War II.

On December 7, 1943 he married Marjorie Marie Hamilton. A few days later he was shipped off to the South Pacific. During this voyage across the ocean on a cattle ship he was awarded the order of the “Shellback” because they crossed the equator. Chet served three years in the war as a Sergeant. Chet never talked about the “war” part of his life at this time. It was a very difficult call of duty. His only stories during his time in New Guinea and Manila were after the war was decided. The men there had to wait to be shipped back home. To help pass the time and keep morale up Chet organized football and baseball teams. He coached the Army Air Corp team and in one game with a crowd of WACS, nurses, officers and Filipinos numbering in the thousands against the Army Engineers Chet not only coached but made the only touchdown and kicked the extra point to win the game.

It was during this period after the war while waiting to go home Bob Hope’s group came to entertain. After the show part of the attending dignitaries were Chicago Bears Owner Lieutenant Commander George Halas and Bud Ward, Amateur Golf champ. Halas asked to visit with Chet Robertson and recruited him and offered him a starting position for the Chicago Bears. Chet said he might be a little old and Halas said “a football player is at his greatest speed and coordination at the age of 27”.  Chet was also considered one of the best baseball catchers in the state and was also offered a starting position with the Tulsa Oilers. However, by the time he was shipped out after the war he was 27. He decided to finish his education and took a football scholarship with Oklahoma City University and received his degree.

The Haymaker Farm was established initially breeding and racing only Quarter Horses, but within a few years Thoroughbreds were added to the program. The Robertson’s had an uncanny talent in choosing top quality broodmares, which led to many champions, stakes winners and winners at the track.  Haymaker Farms owned and bred over 120 Register of Merits, 20 stakes winners and five champions with earnings in the millions.  The success of their breeding farm led to Chet wanting to reduce his stock in 1963. This is when he realized there was not a good sale around, Chet and Dale simply started their own.

The rest is history, with Haymaker Sales Company quickly growing and gaining in reputation as THE sales company in the United States for Quarter Horses of all ages. People from all over the world would attend the Haymaker Sales to obtain the best Quarter Horses available. Chet’s knowledge of horses, bloodlines, his honest and sincere business sense led the way for the once a year Haymaker Sale growing to several sales a year with the top Quarter Horses. Many sales records for top selling individuals were added each and every year.  Soon a Thoroughbred yearling sale was added in Raton, New Mexico to service the many breeders needing a place in the southwest to market their yearlings.

The ranch and the sales company was a family operation from the start. Robertson took great pride in his family and their ability to work together. His wife Marjorie was a major player within the company. Chet always said he couldn’t have done any of it without Marj at his side. Their children Mike and Pat were an integral part of not only his business but his support system as well.  Dale was an integral part of the sales company coming back from his various TV appearances to be the announcer for each and every sale.

One key to Chet’s success as President of Haymaker Sales was his belief not every owner and not every horse fit Haymaker Sales. He would agonize over the sales entries every time to make sure he was offering the public the best individuals available at the time. This meant that Chet would turn down consignments if he felt the owner would be needlessly spending consignment fees, traveling expense, commission fee and the expense of getting his horse ready for the sale.  Those phone calls were hard to make but he made them. Chet always recommended a different sale venue to these owners. He believed he would be saving the owner time, trouble and money in the end.  There were many consignors after getting turned down would make a point of culling their herds elsewhere and improve their stock just so they could make it into Haymaker Sales.

Chet was always a winner and a success in everything he did, so it was only natural that when he became involved with racing he wanted the state’s industry to be the best it could be.  He knew Oklahoma already had the best horses in the nation, so Robertson believed the horsemen deserved to have pari-mutuel racing for those outstanding horses to compete at home. With his big smile and his leadership abilities, Chet set out to talk the state into passing pari-mutuel racing. Making 77 counties in the campaign he was instrumental in the formation of the Oklahoma Horsemen’s Association with the main purpose of all horsemen working together to pass the pari-mutuel. Chet was adamant in wanting the OHA to be an all-breed organization because he knew it would take all the horsemen in the state to get the issue into the hands of the voters. He was proud of the unique concept of the leaders from four racing breeds coming together into one organization for one purpose. Unfortunately, Chet died before the final successful pari-mutuel campaign, those who worked so hard to get out the word and the vote knew that Robertson was sitting on their shoulder with every petition they had signed and every campaign speech they gave.

Chet’s likable and outgoing personality made everyone feel like he was their friend, and as far as he was concerned he was. Great writers have always said that a man should be judged a success not necessarily by his deeds, but by his friends. That is how he would have wanted to be judged because even though his horses and his business were important and where he gained great respect and success, Chet was a people man. Because of a genuine interest and love for horses and their people, Robertson became a voice of an industry that can still be heard today echoing throughout the aisles of sales barns, track barns and race tracks.

His legacy lives on because Haymaker Sales established Oklahoma City OK as THE place to market horses. After his death Haymaker Sales became Heritage Place, Inc.  The market that Chet built in Oklahoma City, Oklahoma is still considered the place to come to buy the best Quarter Horses in the world.