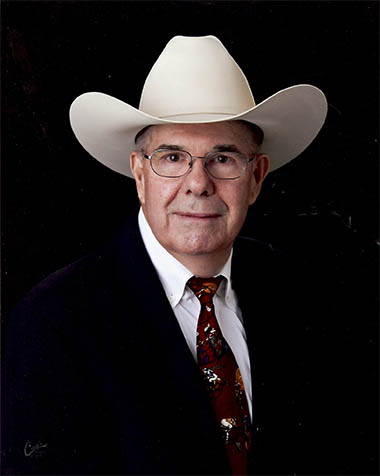 Clayton Keys was born on October 2, 1937 in Bartlesville, Oklahoma. While growing up there, two important aspects of his life were established early on. One, “The customer is always right”. Clayton says his mother, who owned a restaurant in Bartlesville, instilled that in him from the time he was very young. The second aspect was his love of horses. While Clayton, his parents, brother Jay and two sisters, Lois and Carol lived in town, they also owned a ranch in Ochelata, Oklahoma. Clayton and Dorothy Kay live on that ranch to this day.

His uncle, Bertie Painter, a steer-roper, introduced Clayton to roping and riding when he was young. Clayton developed such a love for horses, that when he graduated from High School and left for Oklahoma State University in the Fall of 1955, he insisted on taking his horse with him. He already knew he wanted a career in the horse industry.

On November 22, 1963 he married Dorothy Kay. They have a son, Barry, and two granddaughters, Abbey and Hallie

In 1966, Clayton’s career in the equine industry began as the Ranch Manager at Stan-D Ranch in Beggs, Oklahoma. In the early 1970’s he moved to Citation Farm in Jenks, Oklahoma where they stood the accomplished stallions Triple Chick and Mr. Meyers. In 1972, he was hired by the All-American Sales Company, now known as the Ruidoso Sales Company. He was with them until 1997. For most of the 70’s and 80’s, his own sales company, Keys Sales, put on two sales a year at the Tulsa Fairgrounds. From the late 70’s to the early 90’s, he managed sales for many different companies, including, Out Front Sales, Green Country Horse Sales and Purcell Horse Sales. He is also part-owner of the Tulsa Holiday Circuit.

Clayton also worked with The Heritage Place Sales Company from the time they broke ground 35 years ago. A group of owners wanted to build a premier facility that would rival those the Thoroughbred breeders had in the bluegrass of Kentucky. Robert Gentry, one of the original organizers said, “We were successful beyond our wildest dreams and none of it would have been possible without Clayton.” Clayton’s knowledge of the horse industry, his amicable demeanor and unshakeable work ethic made him the perfect man to manage the operation of such a high-profile endeavor. He says his goal as General Manager of The Heritage Place was to treat everyone fairly, regardless of their position in the industry. It didn’t matter if they had 20 horses or 2. It didn’t matter if they spent a million dollars or two thousand. The objective was to treat everyone the same. Another of the founding members, Dr. David Graham, said, “There was never a time when Clayton wasn’t model of integrity, honesty, fairness, and heads-up professionalism. He did an absolutely incredible job in every aspect of the position.” Those of us who know Clayton, know that he lives his personal life by those same rules. He is also known to be a practical joker. One of his favorite pranks is to carry a Styrofoam cup of coffee and as he approached you, he would pretend to stumble, causing him to drop his cup of hot coffee on you. Even though the victim soon realized it was just an empty cup, the scare was enough to require a few minutes for your heart to recover.

Clayton is such a valued attribute to The Heritage Place that on September 22, 2007, they dedicated a bronze bust in Clayton’s image which will remain on display in the facility.

Clayton didn’t excel in the horse industry just for his expertise and love of horses. It was his love of the atmosphere and the people. He says, “I always like to be in the back of the barn at a sale and working the gate at a horse show. That’s where you’re sure to meet everyone and every horse that comes and goes. That’s the part I enjoy.” Well Clayton, if any of those many individuals were to stand up tonight, they would surely say the pleasure was all theirs. Clayton truly represents the very best of the equine industry.