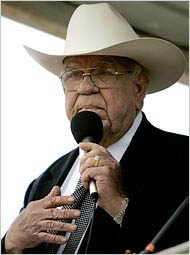 Clem Rogers McSpadden was born on November 9, 1925 in Busyhead, Oklahoma.  He was the grandnephew of humorist and motion picture actor William Penn Adair “Will” Rogers.  He grew up on a ranch in Oologah, OK, that was owned by Rogers and managed by Mr. McSpadden’s father, Herb.

McSpadden was competing as a professional rodeo performer while a student at Oklahoma A&M (now Oklahoma State) when he filled in as an announcer at an Iowa rodeo in 1947. He earned $100 for four nights of announcing and $286 for winning the calf roping.

He also gained fame as the announcer at the National Finals Rodeo, where he helped discover Grammy-winning country star Reba McEntire.

Early in his announcing career, McSpadden turned to politics. A Democrat, he was an Oklahoma state senator from 1955 to 1972, served one term in Congress, then gave up his seat to seek his party’s gubernatorial nomination in 1974.  David Boren, who won the general election, beat him in a runoff primary.

McSpadden served as a Democrat in the U.S. House from 1973 to 1975 and founded the Congressional Rural Caucus.

Clem displayed a dry wit in his own right when comparing his dual callings of rodeo and politics. When the post office in Chelsea, OK was renamed in his honor, he was quoted by The Tulsa World as observing how “there’s an amazing correlation between the two arenas in that there’s bull in each profession.”

Clem McSpadden, known as the voice of professional rodeo, his Oklahoma intonations a familiar presence through six decades as the sport grew from a rural pastime to a spectacle showcased in Las Vegas.

He went on to become general manager of the National Finals Rodeo in Oklahoma City for almost two decades before it left for Las Vegas in the mid-1980s. He announced rodeos in 41 states and was the first American to be the voice of Canada’s prominent Calgary Stampede. He was a rodeo announcer for ABC-TV’s “Wide World of Sports” in the 1960s.

When Mr. McSpadden opened rodeos, he presided over a quiet moment, reciting the cowboy’s prayer he had written. It became a signature of his persona. It concludes:

“Help us, Lord, to live our lives in such a manner that when we make that last inevitable ride to the country up there, where the grass grows lush, green and stirrup high, and the water runs cool, clear and deep, that you, as our last Judge, will tell us that our entry fees are paid.”

Mr. McSpadden operated a ranch near Chelsea, and he owned a lobbying firm in Oklahoma City.

He was a Professional Rodeo Cowboys Association past president, recipient of the Ben Johnson Memorial Award of the National Cowboy and Western Heritage Museum in 1998.

Inducted into the Rodeo Hall of Fame of the Rodeo Historical Society (a support group of the National Cowboy and Western Heritage Museum) in 1989.