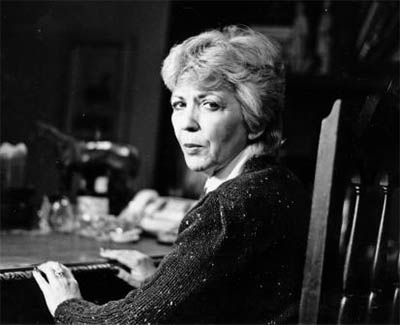 For thirty-four years, Constance “Connie” Golden was the owner and publisher of Speedhorse, Inc. After acquiring the company in 1977, she transformed the struggling, indebted publication into a strong voice for the Quarter Horse Racing Industry. In her role as publisher, Connie felt a deep responsibility to use the publication’s platform to make the industry healthier.

Connie was born in Elmira, New York in 1935. Due to her father’s job, her childhood was spent moving to different cities in the United States. In the 1940s, she even lived here in Oklahoma City where her father opened the hub in the city for American Airlines. Her ties to Oklahoma did not end there. Her grandfather was a well-known oilman working as a geologist with Skelly Oil at the early stages of the oil boom.

Connie’s global perspective was shaped by early international experiences. She completed high school in England in 1953 and was a member of the first graduating class of the Central High School in London. Later in the 1950s, after studies in accounting at the University of New Mexico, she moved to Rio de Janeiro with her then-husband, the late Julius Golden of Albuquerque, New Mexico, who was covering South America for the Associated Press. In Brazil, Connie launched a successful modeling career and taught English and American Literature at the University of Brasil.

Through her hard work, savvy business acumen and courage, Connie was a pioneer business woman, who served as an example for other woman striving to succeed as entrepreneurs and managers. Connie began her career in business in Albuquerque, New Mexico in the 1960s opening Connie Golden Real Estate, which quickly grew into one of the largest real estate companies at the time. Later she worked in residential property development in both Albuquerque and El Paso, Texas.

After moving to Norman, Connie was offered the opportunity to purchase Quarter Racing World, which she renamed Speedhorse shortly after the acquisition. With just four employees, Quarter Racing World was in debt for a quarter of a million dollars, and was on the verge of failure. Through her determination, Connie succeeded in paying off the debt in one year. Under her leadership, Speedhorse grew quickly. Within three years of Connie taking the helm of Speedhorse, it was transformed into the leading publication in the industry. In 1980, she purchased the Stuckey’s building on I-35 and Goldsby, which she redesigned and renovated.

This move came at time of deep changes in the publishing and the Quarter Horse Racing industries. The new building housed a main frame computer, which required a specially designed climate controlled room to hold what was at the time cutting edge technology for managing complex data bases. Connie envisioned a Quarter Horse pedigree service for the industry that could be downloaded from anywhere in the world. To run both the publishing and pedigree service, Speedhorse at its peak employed more than 100 people. Unfortunately, due to the financial crisis of the early 1980s, she was forced to close the data base down. But from the perspective of today’s Internet and online services, Connie was an innovator trying to bring this new technology to the Quarter Horse Industry.

At heart, Connie was an entrepreneur, never satisfied with business as usual. In 1980, she started the Thoroughbred Times, a bi-monthly publication, which she sold in 1981 to a Kentucky-based firm.

By the early 1990s, the industry had recovered, and Speedhorse was once again at the forefront of change, this time focusing on developing breeder-based races. Connie, together with her son, Andrew Golden, established the Speedhorse Gold and Silver Cup Races. The futurities carried an overall purse of more than $700,000 in 1990. The Speedhorse Gold and Silver Cup Races are still a visible part of the industry today.

In the early 1980s, the writer Scott Wells approached Connie with the idea of Speedhorse publishing his book on the Jockey Jerry Nicodemus and the horses he rode. The Nicodemus Era turned out to be an elegant limited edition book, which is still sought after today, 35 years later. In the late-1980s, Connie traveled throughout Mexico, meeting with leaders to profile the developing racing industry there. An outcome of that trip was a full issue dedicated to Quarter Horse racing in Mexico.

Stallions always figured the most prominently in Quarter Horse racing, but Connie believed that the broodmares were not getting the recognition that they deserved as drivers of the industry. That’s why she dedicated the June issue of the magazine to featuring editorials on Broodmare accomplishments and founding the Broodmare of the Year Award.

Connie was courageous as a publisher and committed to Speedhorse being a strong voice for the health and long-term viability of the industry. Over the course of a year in the early 1990s, Speedhorse ran a series on the importance of introducing blood-typing to halt the practice of falsification of breeding documentation. At the time, horses could be registered without any verification to their true breeding. The issue was really hot at the time. For its actions, Speedhorse received threats, trying to stop future publications on the topic. Connie pushed forward with the articles, which was a major victory in bringing legitimacy to this part of the industry. Connie felt a deep commitment to journalism’s role in writing about difficult topics, which, at times angered clients and cost advertising dollars. Although to the end of her day, Connie was convinced that for the industry’s sake, this reporting was imperative and took precedence over profit. Her motto was “if it was good for the industry, it was good for Speedhorse.”

Connie was known for her work ethic. Her son, Andy noted in a recent article published in Speedhorse that Connie “was not a 9-to-5 person, she was a 24/7 type of person.” She worked closely with employees to help them achieve their potential within the organization. It is a tribute to her management style that there are so many employees that have been with the company for decades, and that are still involved in shaping Speedhorse’s future.

Despite her very public role and full life running a business, Connie’s priority overall was her family. Her biggest joy and pride was that she was able to work alongside her son Andy on a daily basis. The company’s major growth happened because of their partnership.

In 1996, Connie was diagnosed with severe COPD. Connie died in June 2012. For the last 14 years of her life, Connie served as a model for how people with chronic disease could still live productive and fulfilling lives. Connie worked full-time until her retirement in 2010. She exercised daily and was also a consummate and very talented painter. Most of all, Connie was an extremely dedicated and loving mother of two and grandmother of two.