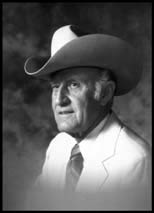 Harold W. “Huddy” Hudspeth of Bixby, Oklahoma, listed his occupation as “semiretired horse trainer.” An ever-present member of the AQHA World Show ring crew since the show moved to Oklahoma City in 1976, Hudspeth judged the first World Show in Louisville, Kentucky, in 1974.  In 1980 and 1987, he helped select the world champions in Oklahoma City.

At 16, Hudspeth began breaking horses for local ranches.  He learned mainly from one of his father’s hired hands and from doing it himself. “You can’t read how to do it or even be told from an expert… it comes only from the experience of being around horses every day,” he says.  “In order to make it as a trainer, you have to be able to think like a horse.” Hudspeth specialized in cutting, roping, reining and honesty.  He could tell within 30 days if the horse had the characteristics of a winning horse or not. Hudspeth took a short break from training in the 1940s when he flew 33 B-24 bombing missions over German territory during World War II. He received his judging card in 1966, then judged 25 to 27 Quarter Horse shows each year, along with almost a dozen other breed association shows.  Hudspeth traveled to most of his judging assignments in his four-seat Bonanza aircraft.  He retired at the age of 70. A life member of AQHA, Hudspeth was a member of the Oklahoma Quarter Horse Association for 40 years.  He served on the AQHA Judges Committee and, in 1983, was named AQHA Honorary Vice President.  In 1999, he was recognized by his ring-crew peers, most of them young enough to be his grandsons, with a World Show jacket for his years of work in the arena. Hudspeth was inducted into the American Quarter Horse Hall of Fame in 2000, the Oklahoma Quarter Horse Hall of Fame in 2006 and died in July of 2006.