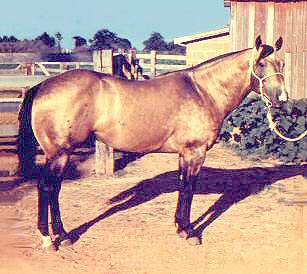 “Harlan was foaled on October 21, 1951. Bred by Jack and Paul Smith of Indianola, Oklahoma. We bought him on November 1, 1954 and owned him until his death on May 23, 1973 – all except for 3 years. We sold him to Bud and Evelyn Breeding of Oklahoma City and they stood him down the road from us at Bob’s brother, Dick Robey’s place.” He is buried here, in our backyard. He was a good individual and a big part of our family” . . . Jo An Robey

The Robeys bought Harlan as a three year-old. They had been breeding mares to Hank H, partly because the babies were so outstanding but also because of his full sister, Squaw H. When Bob and Jo Ann were first married (1948) they went to a race meet and saw the great mare Squaw H run. They were impressed and jumped at the opportunity to breed their mares to her full brother at a later date.

Bob and Jo An Robey bred eight outside mares to Harlan the first year they stood him at stud. They had plenty of their own mares to breed so with Bob working full time off the ranch, they stayed pretty busy. Harlan proved himself to be a sire from his first foal crop.

Jo An tells a good story about how quite a few of Harlan’s foals came to be located in the state of Alabama. She said that in or around the year 1956 three men showed up on their doorstep and brought a load of 13 mares to Harlan to breed. These men were from Alabama – Pete Reynold , T A Simpson, and Ralph Eagle.

Well, they bred the mares and this ‘partnership’ of Alabamans left the mares there in Oklahoma. The Robey’s foaled these mares out the following year. They were then bred back, and after they were all in foal, the Alabama fellows showed up and took 13 three-in-one packages back home. Jo Ann says, “we got a lot of foals down in Alabama that way.”

Around 1962 the work load of breeding horses and a full time job got to be a strain on Bob. This is when Harlan was sold. But he never left the ranch ‘down the road’ that he was to stand at for his entire life. But Bob missed owning Harlan. It took him until 1965 to form a ‘syndicate’ of his closest friends to buy the stallion back. You may recognize some of the names in this syndicate because they are well known in the Quarter Horse world . . . Bob Robey, Harold Hudspeth, Jim Nance and Carl Miles.

Harlan’s foals continued to excel in the show ring. He became a leading sire of AQHA Champions, and the Robey’s continued to enjoy his kind ways and gentle disposition. Jo An Robey said he was such a nice horse that their adopted son, Bart Robey, (soon to make a name for himself in the Quarter Horse industry) could lead him around when Bart was only 5 years old.

In Jo An’s opinion the best Harlan foals in the show ring were Jim Harlan and Harlan’s Tyree – About Jim Harlan she said, “he was the best ‘halter’ horse, and was bred by Jim Nance and out of Nancy Squaw . . . Harlan’s Tyree could win grand at halter, then go win the pleasure and the reining.”

In 1973 Harlan had a stroke and bred only a few mares that year. Then on May 23, 1973 he took a turn for the worse. “Bart went and brought him home. He is buried next to my old buckskin mare, Oklahoma Rosie. We bought her in 1949 when she was 18 months old – had her longer than Harlan,” said Jo An Robey. Jo An said they took a break after Harlan died.

Bob developed an interest in racing (he was probably remembering old Squaw H). The racing interest lasted until they saw Harlan Okmulgee. They went to see some two year olds sell at the Oklahoma Spring Sale and were really impressed with this Harlan son’s siring ability. Bob had the Harlan fever again. They started breeding mares to Harlan Okmulgee and now stand a son of his at stud, Jodie Bob Harlan or “JB” for short. JB is linebred to Harlan and carries 37.5% of his grandsire’s blood, and also figures out to being 94% Foundation Quarter Horse. JB is only a 1992 model and buckskin to boot.

Harlan was inducted into the Oklahoma Quarter Horse Hall of Fame in 2006.