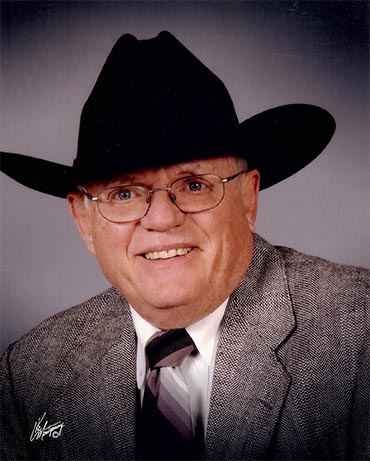 John was born in Lawton in 1935 and grew up in the cattle country of Southwestern Oklahoma, where a great horse was as important to most people as a good car. John says, “We have needed a good versatile horse with athletic ability. I just enjoy being around those horses who have cow sense and the sense to do anything you ask of them.”

Like many who were raised around horses, he tried his hand in the rodeo arena. “I rodeoed a little until I realized I was not going to make any money!” John laughed. So, he graduated from high school in Elgin and subsequently received an Associate BA Degree from CameronCollege.

John’s interest in the horse show industry was inspired by his wife’s obsession.  Susan worked for Harold Adams who a very successful standard-bred trainer.  But when their daughter, Lynn, started showing in 4-H shows, the interest immediately shifted to quarter horses.

John was President of the Oklahoma Quarter Horse Association in 1984, and when someone was desperately needed to run the office in 1985, John accepted the challenge as the OQHA Executive Secretary – a job which he fulfilled with exceptional dedication and distinction for the ten years.

Hard work has always been a way of life for John. He worked in the Transportation industry for over 30 years.  Much of that time was spent working Labor Union negotiations for Leeway Motor Freight.

His hard-nosed negotiations in that venue helped him become a decisive judge and earned him a reputation as an honest, strict, no-nonsense judge in the horse arena as well.

An active supporter of 4-H and other youth activities, he was instrumental in the formation of the OklahomaCounty 4-H horse club. He served as Consultant to the Oklahoma 4-H Advisory Council for four years and as Chairman of the OklahomaState 4-H horse shows for over ten years.

John holds judges cards in 11 equine associations and judges from 40 to 60 shows a year. In addition to the US, John has judged  in Austria, Canada, Belgium, Denmark, Dominican Republic, Germany, Honduras, New Zealand, Norway, The Netherlands, Sweden, Uruguay, and Mexico.

For 25 years, John and his wife, Susan, owned and operated a training facility specializing in youth and amateur halter and performance horses. His dedication to so many programs and his willingness to donate his time  proves his unique passion for seeing others succeed.