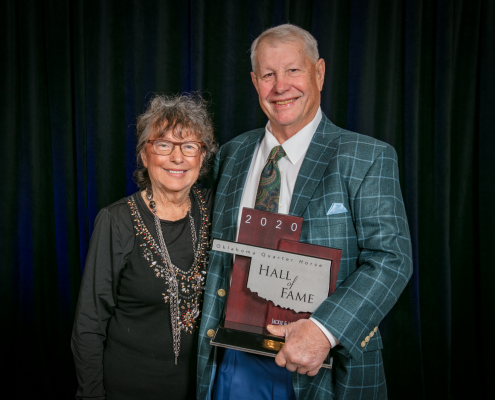 Mel Bollenbach grew up on a farm 12 miles east of Kingfisher; his Dad bought his brother and him a Shetland pony named Sugar.  As he got older, one of their mares had a half thoroughbred foal, and his dad gave her to Mel; he named her Pee Wee. He broke other horses to ride for some of the neighbors and his family, but Pee Wee was his heart and soul. While attending college, Mel’s dad asked him to sell Pee Wee for tuition money, and he never quite forgave him.

Jackie Bollenbach is from Pawtucket, Rhode Island and was raised in Boston. She and Mel met while he was stationed as a Naval pilot at Quonset Point, Rhode Island. The night Jackie met Mel, learning he was from out west, she asked him if he had a horse! That, to her, was more interesting than him being a pilot! She has her BA degree in Accounting from Central State University.

In 1969, Mel left the Navy and went into the brokerage business with Harris Upham. In 1976 he purchased two pieces of land. Naturally he needed a horse, so he asked a client and friend if he knew of any available horses. He said Nolan Pevehouse was having a partial liquidation sale and that he would go horse hunting. The next day he called and bought Mel two horses, and one he thought was a racehorse, Fast Misty. That was the Bollenbachs’ entry into racehorses.

The Bollenbachs’ first racing success started with a mare named A Special Smith who was the dam of Bully Bonds, A Special Bully, Barneys Special, Wallstreet Darlin, Miss Stocks And Bonds, and Sassy Smith. They bought a syndicate interest in Corona Cartel, Valient Hero, Azoom, Mr Jess Perry, Wave Carver, and Teller Cartel through a partnership as a two year old.

Mel states, “We have had many highs and lows with our race horses, but winning a race keeps you going through the bad times. If you do not have a lottery ticket, you have no chance of winning. I hope I have yet to see my biggest accomplishment; however, producing Valient Rogue out of Azoom Babe, who is out of Miss Stocks And Bonds, our home grown stock was pretty good.” Azoom Babe also produced Corona Ranger which makes her a millionaire producer. They also produced Krash Cartel out of Race Valentine, a Strawfly Special mare. The Bollenbachs also had a cutting horse, trained by Matlock Rose, “but we both have sort of been put to pasture!”

“Since I sort of have a vertical operation in racehorse stock, I think the greatest satisfaction is producing a racehorse that can compete with the best is the objective. Nothing to do with racing, but from personal development, my experience as a naval pilot landing on a pitching deck at night and other aspects involved with flying gave me the confidence to do whatever I wanted to do and instilled that my frame of mind was my only limitation.”

The Bollenbachs have two children, Wayne and Kim. Their son, Wayne, and his wife, Rebecca, have twins; a boy and a girl, and their daughter, Kim, is married to Lance and they have two boys and a girl.