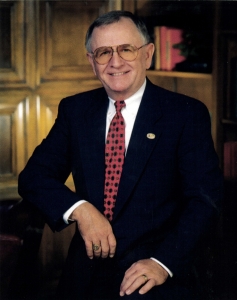 As a child, Mike Perkins hoped to one day own a horse. He never imagined that he would become president of the American Quarter Horse Association, the largest equine association in the world.

His interest in Quarter Horses led to a friendship with former AQHA President S.M. Moore, who convinced Perkins to help him run his annual horse show in Dewey, Oklahoma, which was one of the largest shows in the country at the time. As Perkins became more familiar with the show, he decided to try it for himself.

Perkins began judging AQHA shows in 1970 and has judged the majority of shows held in the United States. He has also judged in Japan, South and Central America, Australia, New Zealand, and throughout Europe.

During his time on the AQHA Executive Committee, he served two years on the AQHA Racing Council. He also concentrated on marketing American Quarter Horses and developing opportunities for breeders and members.  America’s Horse magazine mailed its first issue in September 1998, during Perkins’ presidency, as a part of that goal. The AQHA Ride program continued for its second year, giving recreational riders a reason to maintain membership with AQHA.

Perkins also marketed the Quarter Horse in an even more visible way. Starting in 1990, and through his time on the executive committee, he served as a commentator on AQHA’s television show America’s Horse which aired on ESPN.

Perkins was inducted into the American Quarter Horse Hall of Fame in 2005.