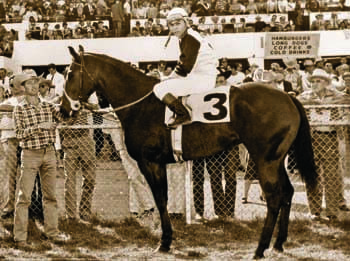 Miss Olene was a product and a producer of American Quarter Horse racing royalty.

Miss Olene was a winner on the Quarter Horse tracks, where she earned $31,022 while compiling a record of 11-3-3 in 33 starts. However, the mare is remembered most for the biggest race she didn’t win, the first running of the All American Futurity.  Earlier that summer, Miss Olene finished third in the Ruidoso Futurity and went to post as the favorite in the 11th race at Ruidoso Downs on Labor Day 1959.  With Richard Lujan in the irons for trainer Jerry Fisher, Miss Olene took the early lead out of the gate, while Tonta Lass broke so hard she lost her rider.  But Miss Olene could not maintain the pace and faded to finish third in what would become Quarter Horse Racing’s signature event.

In the 1959 trials to the Pacific Coast Quarter Horse Racing Association Futurity in California that followed, Miss Olene won the Bardella Handicap at Los Alamitos.

Owned for a time by Vernon Pool and Henry Hurd, both of Oklahoma, the mare later went to New Mexico, where Sarah Henderson and Harriett Peckham made her a mainstay at the Buena Suerte Ranch at Roswell.

Little Blue Sheep, Miss Olene’s 1972 foal by St Bar, was the world champion aged mare twice and produced stakes winners Browns Dasher and Rheaetta, and the stakes-placed The Louisiana Girl, whose six stakes winners include the track-record-setting champion Jess Louisiana Blue, who has sired the earners of more than $7.2 million.

Miss Olene produced Little Blue Sheep’s full sisters Miss Angel Eyes, who won the Kansas Futurity and was third in Hall of Famer Rocket Wrangler’s Rainbow Futurity, and went on to produce one stakes winner and three other winners from five starters; and Takeme Freely, who won the Debutante Handicap and was third in Game Plan’s Bay Meadows Futurity, and produced three starters, all winners.  Miss Olene was also the dam of Rillito Derby winner Master’s Angel by Master Hand (TB), who produced six winners from seven starters.

Miss Olene also produced the stakes-placed Bar Tonto mare Prissy Olene and Little Bar Olene, a Three Bars (TB) filly who was second in the 1965 Rainbow Futurity and earned points at halter to become an AQHA Champion.  And one of her unraced foals went on to produce a black-type performer, Teenie Weenie becoming the dam of the stakes-winning Cashcan ($114,012).