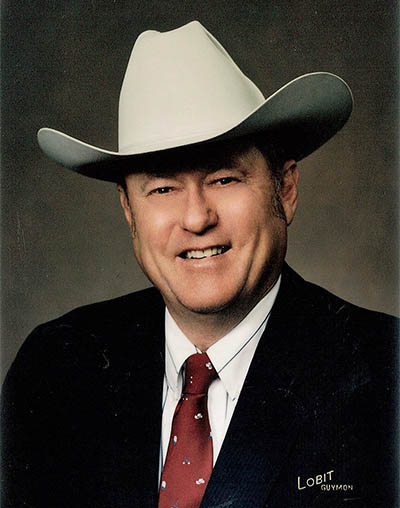 Earnest Ray Kimsey was born June 11, 1932 in Oklahoma City, OK to parents Deronda Kimsey and Thelma J. Jackson Kimsey.  He graduated from Putnam City High School and was awarded a basketball scholarship to Oklahoma State University where he played for Coach Henry Iba for three years. Ray’s interest in the cattle business led him to working in the Animal Science meat lab and joining the meats judging team. He credits many of his long standing friendships and customers to the time and people he met judging. During this time period, he married his high school sweetheart, Delores Hales, in 1953. Kimsey served in the ROTC during college, graduated with an Animal Science degree in 1954, and completed his military requirements in 1956. His military service taught him to be decisive and stand behind his decisions.

After the Army, Ray went to work for Armor & Company as a cattle buyer in Oklahoma City. The company moved him to Dodge City, KS, then Amarillo, TX, and back to Dodge City.  Ray then became an order buyer and partner in Hi-Plains Cattle Company in 1964-65, along with his partners, he built the first commercial feed yard in the Oklahoma Panhandle.  Texas County Feed Yards, Inc. was one of the largest capacity feedlots at that time with 33,000 head. He served as General Manager/Owner 1964-1992, and General Manager 1992-1996.  Kimsey is considered a pioneer in the cattle feeding business. Earning the respect and trust of his customers led to life-long business relationships. When asked what the most important factor to his success was, Ray quickly gave credit to good people that helped him along the way, and giving credit first and foremost to his wife, Delores, for all of her support.

Ray and Delores started with owning quarter horses for the family’s enjoyment. When long-time friends and neighbors, Dee and Barbara Follis, shared their show experience, the Kimsey’s became more determined in breeding, raising, and showing quality quarter horses with their two youngest daughters. Ray became a member, youth advisor, state and national director and ultimately the 1998 Oklahoma Quarter Horse Association President. In 1998, he was involved in the launch of the OQHA Redbud Spectacular Quarter Horse Show.  As an AQHA National Director, he served on the AQHA Equine Research Committee for two years. He served as an OQHA Youth Director from 1992-1994. Ray has always had a brain for finances and the importance of staying within a budget. In this respect, Ray felt the OQHYA needed to get out of debt, so he raised approximately $30,000 to offset their debt. With part of the money raised, OQHYA assisted team members with expenses to go to the All American Quarter Horse Congress. One of Ray and Delores’ favorite memories from working with the youth is when the 1992 team won the All American Quarter Horse Congress Team Tournament and the state competition at the AQHYA World Championship Horse Show that same year with a strong set of youth kids representing all events.

As youth advisor and horse show parents, Ray and Delores attended many shows. Ray kept a meticulous record of the points for all the kids he knew and had the most up to date year end tabulations on hand at the shows. Delores always had food available, and several times dressed up as the Easter Rabbit for the OQHA Spring Show.