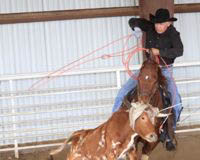 Rodger was born with horses in his blood in Pensacola FL July 16, 1944 where his father was in the armed services. After serving they returned to their roots…Locust Grove OK, has a small dairy farm and Rodger attend Locust Grove School.  At the age of 7 his mother purchased his first horse for $35. When he was 13 Rodger has his first job opportunity.  Von Cook took Rodger and a horse he owned to Omaha NE.  Rodger worked all summer warming up and cooling race horses.  Both slept in the car. No problem for Von because he had no legs but a little cramped for Rodger.  Good memories.  Rodger left home his senior year and moved to Pryor OK where he attend school from 7 am until noon and worked in a furniture store from noon to 5 pm.

Rodger went in to the US Marine Corp in December 1968. His assignment was Combat Correspondent stationed in San Diego CA.  He was a journalist writing for a newspaper called the Chevron and took all the VIPs on tours of southern California.  Rodger made E5 or Sergeant in 13 months and served 2 years active and 4 years in the reserves.

While in the service he studied martial arts and received a brown belt. Upon returning to civilian life Rodger earned a 2nd degree black belt.  Then he taught self-defense classes at Rogers State College in Claremore OK, and also completed his Associates Degree.

Upon graduation he went into banking as a load officer for approximately 10 years. Then purchased his first business, a credit bureau and collection agency in Claremore OK which grew into three agencies in surrounding towns.

Because of his love for the Quarter Horse, it has always been a desire to further the growth of the American Quarter Horse Association and OQHA. In addition to the volunteer work he has had the opportunity to develop and help new members. This includes their learning and appreciating our trail riding program, helping young trainers not only see the value of becoming a member but instrumental in starting or growing their horse training business, see a new member become Rookie of the Year and learning to appreciate/love the Quarter Horse. In 2009, it was so rewarding for Rodger to help one child become a participant of the OQHYA in the AQHYA World Championship Horse Show and another young roper develop and learn some roping skills for his participation at the AQHYA World Championship Horse Show. He can tell you that nothing is so rewarding as seeing their smile after the participated and learning that they could have their picture taken just for doing their best.  We will have a new roper at the Bayer Select AQHA World Championship Horse Show in 2009 because Rodger has convinced him how much fun he will have, the friends he will make plus showcase his talent.  Rodger is hauling his horse to Amarillo TX and has had the calves for him to use for practice.  Hardly a day goes by that somebody is not at Rodger’s home riding or roping on their Quarter Horse.  Rodgers State University rodeo team’s practice, senior citizens with health problems to youth wanting to rope, ride and enjoy the Quarter Horse.

Rodger has been a member of AQHA since 1961. During the late Joe Sawyer’s reign as President of OQHA, he attended his first OQHA Convention at the Camelot Hotel in Tulsa OK.  At that convention, he was put on the race committee. In 1979 Rodger was elected to the OQHA Board of Directors and elected President in 1988.  He became an AQHA National Director in 1983.  Rodger was very fortunate to have had a great mentors in Joe Sawyer, Jack Anderson, Joe Young, Harold “Huddy” Hudspeth, Everett Salley and Bud Breeding.  They helped prepare him to serve on the AQHA Nominations & Credentials Committee twice. Show & Contest Committee and subcommittees World Show for 24 years.  In 2000 Rodger was elected to the prestigious position of AQHA Honorary Vice President.

After selling the credit bureaus, Rodger now owns and asphalt paving company in Tulsa OK. This company and its good employees have given him the opportunity to enjoy and make the Quarter Horse part of his everyday life.

At the age of 52, Rodger decided to try roping. He won the AQHA High Point Breakaway Roping five years in a row.  In 2002, his roping mare, Regers Sheba was the AQHA Leading Contention and High Point Tie Down Roping Horse.

During the time he met the Schroder family. It was like starting all over in the roping arena.  Robbie Schroeder showed him how to show a roping Quarter Horse at an AQHA horse show.  Robbie obtained a gelding, Irish Whiskey Mix by Paddy’s Irish Whiskey for Rodger.  This was a new experience…the horse was mor3e cowboy than Rodger was. However with Robbie teaching and Whiskey’s patience, they succeeded.  Whiskey was Reserve World Champion at the 2006 AQHA World Championship Horse Show in open Tie Down Roping.  Whiskey and Rodger were World Champions at the 2006 Beyer Select AQHA World Championship Horse Show in Breakaway Roping.  Then Robbie arranged for him to purchase a mare, Lil Red Chickadee by Rooster out of Genuine Redbud.  In 2008, she and Rodger won the Bayer Select AQHA World Championships in both Tie Down Roping and Dally Team Roping Heeling.  That same World Show Irish Whiskey Mix and Rodger tied for Reserve in Dally Team Roping Heading but lost to the tie breaker judge and ended up in third place.

Rodger’s Quarter Horses and he have won numerous state and national open and amateur classes in halter and roping over the years. As he says “the Quarter Horse becomes your best friend, is dedicated knows his/her job, gives you their best, meets difficult challenges and inspires people.  It is a real partnership and brings out the best in a person.”  Every one of these great horses has been treasured.  The Quarter Horse is his way of life.  He knows he is so fortunate.  He also knows he has the best guardian angels and certainly does keep them busy.