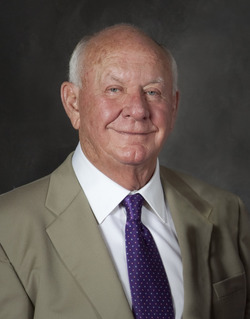 Terry K Bell was a prominent Lawton businessman who made his fame in the moving business.  But his first love was breeding and racing outstanding American Quarter Horses in Oklahoma.

Terry was born in Wichita Falls, TX, but his family moved to Lawton when he was two years old.  His love for horses began at an early age and by his teens he was riding and roping.

Terry worked tirelessly in his effort to bring racing to Oklahoma.  Remington Park has been a blessing to the Oklahoma horseman and has brought awareness to the state.  He served on the board of director of the American Quarter Horse Association, a past president of the Oklahoma Quarter Horse Racing Association and a director emeritus for OQHRA.

Most of his Lawton OK friends knew about his stable of horses, but few knew that he was actually an expert in that field.  He didn’t need studbooks or directories to rattle off the pedigrees of his great horses.

Terry Bell, Homer “Bud” Hill and Jim Pitts established a long time partnership.  The “You and Me Partners” as the group was known, made many appearances in the winner’s circle with their race horses.

Eyesa Special, the 2000 champion 2-year-old Quarter Horse, career punctuated by record-setting Grade 1 victories.  In the All American, Eyesa Speical won by two lengths in 21.097 seconds for the 440 yards, the fastest quarter-mile ever by a 2-year-old. Eyesa Special then won the Grade 1 Texas Classic Futurity in a stakes-record 19.48 seconds for the 400 yards.

Purchased as a yearling for $15,000 by Bell, Hill, and Pitts, Eyesa Special was syndicated and is standing at stud at the 6666 Ranch in Guthrie, TX.

Shoot Yeah won the Sun Country Futurity and Kansas Futurity.  He ran out more than $300,000.  Shoot Yeah set the all-time highest qualifying mark for the All American Futurity but just minutes before the race had to be scratched because of a leg problem.

Mighty Invictus won the 2005 Dash For Cash Derby at Remington Park and then again in 2011 when Mighty B Valliant took the Remington Park Futurity title.  The list of winners goes on and on with winnings in excess of $1.5 million.

Terry had a strong friendship and working relationship with Jack Brooks, the most successful quarter horse racing trainer in the world.  Their relationship spanned nearly three decades.

Due to his accomplishments in the sport of racing, Terry’s peers recognized and inducted him into the 2012 Oklahoma Horse Racing Hall of Fame.

Sadly, he died of cancer at the age of 77, just ten days before the induction ceremonies at Remington Park.  The legacy of Terry Bell lives on as his farm, which continues to raise some of the finest Quarter Horses in the state.