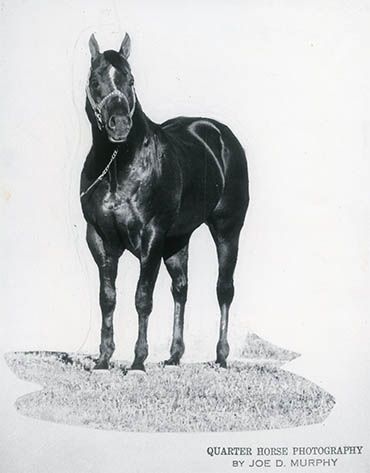 Even though he didn’t have a record to stand on, Big Step sired outstanding offspring who could halter and perform with the best in the country.

The 1956 sorrel stallion was bred by Blain Lewis of Patagonia AZ.  He was a well-known and respected ex rodeo cowboy, rancher and horse breeder who believed that horses were meant to be used.

Big Step’s sire was Parker’s Trouble a 1949 chestnut stallion by Ed Echols and out of Little Nellie Bars.  Parker’s Trouble, AAA rated racehorse was the sire of 36 Register of Merit racehorses and 9 AQHA Champions.  Also known as a top broodmare sire, he was the maternal grandsire of 190 ROM racehorses and 17 AQHA Champions.  Included among his top second generation descendants is Boston Mac.

Big Step’s racing career got off to a decidedly slow start.  In his only two starts as a two year old, he failed to light the board.  AQHA records show no further accomplishments as either a racehorse or show performer.

Prior to the 1962 breeding season, the then six year old stallion was acquired by Don Wilcox of Tulsa OK.  This partnership would endure for 20 years and it would be a relationship that would see Big Step’s progress from a virtual unknown to one of the breed’s most accomplished sires.

Wilcox was born in Arkansas City KS, in 1917.  He joined the Mounted Troop of America, in 1932, a Boy Scout troop that performed in rodeos and at horse shows.  He signed his first professional trick riding contract that same year.  Wilcox, his wife Virginia and daughter Donna Jean went on to become one of the most popular and accomplished trick riders and trick ropers in rodeo history.

Wilcox retired from rodeo in 1960 and immediately hung out his shingle as a professional with a training and breeding program.

Trouble Cat, a sorrel mare out of Figure 8 Patty, earned a Superior at halter, and Nifty Step, a sorrel gelding out of Lady Nifty 53 was an AQHA Champion.

Trouble Step, a sorrel mare out of Patsy Jeanne, was the 1965 High Point Halter Horse as well as the High Point Junior Halter Horse.  In addition, she was a AQHA Champion a Superior halter horse and the earner of 419 halter and 32 performance points.

Known as a sire of both conformation and performance ability, Big Step sired the earners of 10 Superiors at halter and 20 Superiors in performance.

Big Step’s performance champions were a diverse group that encompassed the earners of 20 Superiors in 4 events.

In addition to being one of the top open show horse sires of his era, Big Step was equally adept as a youth show horse sire.  His offspring earned 10 youth AQHA Championships, 3 Superiors at halter and 33 Superiors in performance.

By the fall of 1982, both Don Wilcox and Big Step were in the autumn of their years. The two had been full-fledged partners for more than 18 years.  Wilcox was understandably sentimental where his aged stallion was concerned and was receptive to allowing him to live out his last days in a comfortable retirement setting.

Because she had been friends with the Wilcox family for years, and a fan of the Big Step’s line as well, it only seemed natural that her farm should be the well-known stallion’s last home.

At age 26, he wasn’t as spry as he once was.  Prickett had perfected a technique by which she could collect a breeding stallion on the ground.  She wanted to provide Big Step with the best of care they knew how to give.  Dr Prickett had hoped that they might be able to raise a few foals by him as well, but that wasn’t in the cards.  He passed away of natural causes in the early winter of 1982, a few months after he came to Iowa.

Don Wilcox passed away in 1984, leaving his wife Virginia to disperse the last foal crop.

The Big Step daughters also did their part by producing the earners of 17 AQHA Championships, 5 world championships, 10 Superiors at halter, 63 Superiors in performance, 191 ROMs and 14,130 points in all divisions combined.