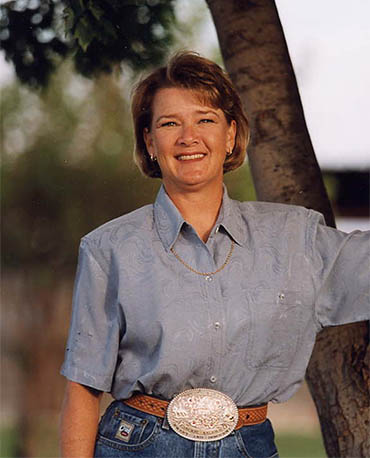 Jackie Kyle Krshka grew up on a 24,000 acre cattle ranch near Santa Rosa, New Mexico.  Her mother was Barbara Johnson Kyle, herself ranch raised and her father, the AQHA Hall of Famer Jack Kyle.  The Kyle family fed and cared for 3,500 cattle.

The Kyle’s horses worked as hard as their owners.  The family typical worked on the ranch during the week and exhibited at horse shows on the weekends.

In the 1940s and 1950s Jack Kyle showed a host of halter and performance horses for legendary Warren Shoemaker of New Mexico (his wife’s uncle) and Hank Wiescamp of Colorado.  Kyle went on to develop his own storied breeding program with the help of such noted AQHA sires as Silver Skip, Skip A Barb and Skip N Stage.

Given her family background, it’s not surprising that Jackie Kyle found herself well mounted at an early age.  One of her early horses was Pay Day, a little grullo horse off the Indian Reservation.  He bucked her off and rubbed her off on the fence, more times than one can count, but he taught her how to ride.

By the time Jackie was nine, she’d earned her first serious horse. To nurture that talent, Jack acquired a little palomino Quarter Horse mare he’d been eyeing for years at shows in Colorado and New Mexico.  Billetta was put together well enough to be shown at halter and she also competed in roping and reining.  Jackie’s great uncle, Warren Shoemaker, ultimately bought Billetta and then sold her to Jack specifically for Jackie to show.

When she was 10 or 11, Jackie, her father, and Sunny Jim Orr competed in a team tournament, an NRHA type reining in Nebraska.  One of the other teams was Bill Horn, Bob Loomis and Doug Millholland.  The Kyle team won and everyone was talking about the young lady on the palomino horse.  Billetta continued to rack up titles.

It would be the birth of a four legged family member that would change the course of the Kyle family history.  In1978, Jackie and her father returned home after dark from a horse show and found their 21-year-old mare Billetta dead, apparently from a heart attack.  Just four weeks earlier, she’d foaled a palomino filly, by Skip N Stage.  After searching the 360 acre pasture, they found a hungry and scared filly with a cut on her leg.  She was raised as an orphan and named her Sweet And Innocent.  As they began to train and show her, the family realized this mare was extremely talented.

By 1981, Jackie had married Tom Krshka and relocated to Yukon OK.  The young couple would soon add a son and a daughter.

The family set their sights on the AQHA Superhorse.  Although strategy for winning the AQHA Superhorse is to qualify a great horse, then hire all the best people to show it, it was the Kyle family that would tackle this monumental task.  Jackie piloted the mare to placings in junior western riding, junior working cow horse and junior reining, and Jack Kyle scored in heeling.  With Tom Krshka aboard, Sweet And Innocent won the Calf roping World championship, and earned the prestigious title of the 1982 AQHA Skoal/Copenhagen Superhorse. Rounding out the family connection, the trio dedicated their victory to Barbara Kyle, whose death had come earlier that year.

Jackie pursued her passion for teaching, and began hauling 15 to 20 horses to AQHA shows, from coast to coast.  As a trainer, she went on to rack up over 40 world championships and coached several clients to all-around amateur titles at the AQHA World Championship Horse Show.  She continues to train and coach today.

In the late 1980’s, Jackie sets another new goal for herself  This time, she targeted what would prove to be the toughest nut to crack, training and exhibiting horses in the National Reining Horse Association Futurity.

After making the finals of the first four or five futurities she tackled, Jackie was not acquiring the horses to support a strictly reining stable.  Along with continuing her winning ways at AQHA events, she was still determined to stick it out with the Reining.   Soon she was named the 1986 NRHA World Champion Ladies Reiner and the 1986 Reserve World Champion Limited Open Rider.  Jackie vowed she would not put a wrap on the Reining goal, until she could be in the top 5 of the NRHA Open Futurity.

Then along came Dunit Rawhide, a 1992 dun stallion by Hollywood Dun It and out of a daughter of Skip N Stage, was bred by Jack Kyle.  By this time Jack had moved from New Mexico to Jackie’s training facility on the outskirts of Yukon OK.

The cross of Hollywood Dun It on Kyle bred mares had already proven to be golden one.  Tim McQuay of Tioga, TX, the owner of Hollywood Dun It, had recognized that fact and made regular trips to Yukon in search of young reining prospects.  In the fall of 1994, he showed up at the ranch, asking to see Rawhide.

Tim watched him for about 10 minutes, and then asked Jack to price him.  The price was a huge amount of money.  Tim did not blink and advised Jack he would have a check on Monday.  It was a painful position for Jack.  He had been Jackie’s greatest support mechanism for years in her training career. He knew Rawhide was the great horse, which could help Jackie, fulfill that lifelong dreams. However, selling it to Tim would, extinguish that hope.

Meanwhile, Tom Krshka had another plan in mind.  Express Ranches owned by Bob Funk was located in Yukon.  Tom approached Bob and asked if his family would like to have a really good reining prospect.  The Funks bought the horse and he stayed in Jackie’s barn.

Jackie and Rawhide slid their way to a third place finish, in the 1995 NRHA Futurity, the highest placing to date by a female exhibitor.  In addition, they were the 1995 NRHA Limited Open Futurity Champion. That third place finish against the likes of Tim McQuay, Bill Horn, Bob Loomis and more, satisfied her longtime goal of competing with the elite of the Reining World.

Jackie stood poised to continue her assault on the equine industry.  However she concentrated on her family and two children Kyle and Katy.  The decision paid off because both children excelled in the classroom, sports and in the horse show arena.

Jackie earned her AQHA judge’s card in 1991 and was named 1999 AQHA Horsewoman of The Year.  She has served as a volunteer on numerous AQHA and OQHA committees such as the AQHA Judges Committee.  She became an AQHA National Director in 2000 and was ultimately elevated to Director At Large. She served as the 2004 OQHA President.

Krshka has successfully coached exhibitors and trained some of the most prized horses in the world, and she is the show coordinator for several large Quarter Horse shows in the country.