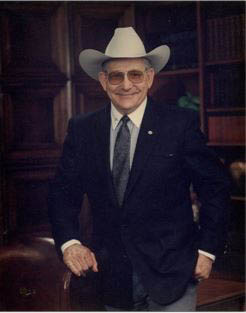 Born in Burr, Texas, he moved with his mother and four siblings to Clemville, Texas, at the age of five, when his father died.  He was Salutatorian of his high school class and the first football player from a Class A school to play in the Texas High School All Star. He also lettered in football at Texas Christian University.

In his spare time, he established the Tulsa Holiday Circuit–and in partnership with Jack Anderson, conducted 68 consignment quarter horse sales in Oklahoma, Texas, California, and Florida– and several production sales, including  three at the King Ranch.

At last count, Everett has produced or managed over 359 association-approved shows.

Everett’s overriding interest in the quarter horse business was his total commitment to encouraging and supporting the activities of his daughter, Lisa, and his son, Cas.  Their successes in the AQHYA, OJQHA and in OPEA youth activities are too numerous to detail here, but it is noteworthy that Lisa was the first female President of the OJQHA.  Both showed as youth, and because of Everett’s encouragement, both have continued as Amateurs.

Everett has served  – and continues to serve – the Quarter Horse industry – State, National and International – with  honor and It is only proper that – tonight – we honor him by inducting him into the Oklahoma Quarter Horse Hall of Fame.