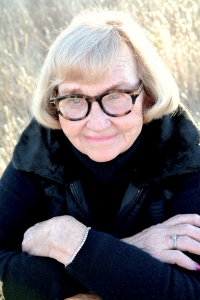 Primrose Henderson Cockrell Dunn was born in Yale, Oklahoma, on June 24, 1945. The second of seven children, she was raised on a working farm. In her teen years, she was active in 4-H and showed registered Hampshire sheep. She attended Central State College in Edmond where she studied elementary education. This is where she met the first love of her life, Andy Cockrell. Soon their first daughter, Laurie, was born. Longing to have horses, in 1968 Prim and Andy purchased their first acreage in Edmond and bought their first Quarter Horse. Under the guidance of Prim’s uncle Roy Lee in Roswell, NM, they purchased a filly named Patsy Chick, an own daughter of Three Chicks, from James Thomas (Jimmie) Randals in nearby Montoya, NM. Patsy Chick was an outstandingly bred mare with conformation that provided consistent wins in the show ring. In 1972, their second daughter, Ninya, was born. Their love of horses was contagious as evidenced when Prim’s obstetrician agreed to trade the baby’s delivery fee for a horse! In these early years there were many friends who advised and mentored Prim and Andy including Helen and Dick Roby, Don Wilcox, Jim Nance, Dick Cox and Lynn Salvatore Palm.

Prim and Andy’s hobby soon turned into a very successful training, showing, and brokering business. Throughout the 70s, the duo trained and showed professionally and hauled youth and amateur riders with their horsesinto the winner’s circles at shows across Oklahoma and the Midwest, showing in both OQHA, AQHA and PHBA.

Needing more ranch space, Prim and Andy purchased fifty acres off I-35 near Purcell in 1979 and built a larger training operation. With the Oklahoma oil boom bust in the early 80s, they moved their training business further south to Forney, Texas. Sadly, Andy passed away in 1989 after battling leukemia for several months. An AQHA Professional Horseman, Prim continued to compete professionally and trained numerous amateur and novice riders and their horses to circuit wins and World Championships.

In 2004, Prim came back to Oklahoma to be near her daughters and her grandchildren. Longing to use her God-given gifts and talents for a higher purpose, she founded the Equine Therapy Center, a non-profit foundation that assisted at-risk youth with retired show horses using Equine Assisted Growth and Learning. Later the name was changed to Reason to Believe Ranch.

In 2010, Prim met and married the second love of her life, David Dunn. David joined Prim in the ministry bringing many hurting people to Christ using horses. Sadly, on Christmas day 2013, David passed away after a short cardiovascular illness. Prim continued the ministry with the help of many volunteers and great retired show horses until 2016 when she decided to retire officially.

Active in her church, Prim now teaches two- and three-year-olds in the Mother’s Day Out program, leads a team who cooks for seniors and the homeless, and leads a women’s Grief share class.

Prim is blessed to have five grandchildren.