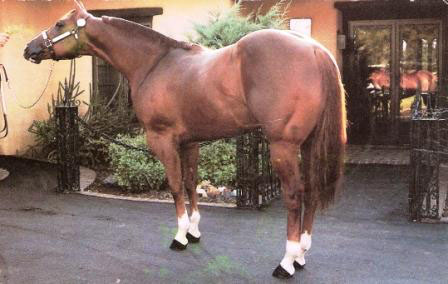 Spanish Array was a bright red sorrel 1980 stallion owned by Indian Meridian Quarter Horses, Enid OK.  He was bred by the legendary AQHA Hall of Fame Breeder Henry J. “Hank” Wiescamp, Alamosa, CO.  Spanish Array was the product of many generations of Wiescamp’s selective breeding program that concentrated on the bloodlines of the turn of the century stallion Old Fred and Peter McCue.  Sired by Skips Barber, one of Hank’s top stallions at that time, he was out of the great mare Spanish Galla, who was sired by the palomino stallion Skips Bid.